Once again this year I'm taking a break from blogging until after the presents are unwrapped and Christmas dinner eaten.  To get all of that ready and still post here would be more than I'm humanly capable of!  So I'll say Merry Christmas to my Christian readers and Season's Greetings to everyone else-- and since I've found that Susan Cooper evokes the holiday mood better than just about anyone else I've ever read, I'll leave you with some paragraphs from The Dark is Rising:


For this was Christmas, which had always been a time of magic, to him and to all the world.  This was a brightness, a shining festival . . . Indoors, the tree glowed and glittered, and the music of Christmas was in the air, and spicy smells came from the kitchen, and in the broad hearth of the living room the great twisted Yule root flickered and flamed as it gently burned down. . . They pounded up to their respective bedrooms and came down with packages to be added to the growing pile beneath the tree. Will had been trying hard not to look at this magical heap ever since they came in from carol-singing, but it was sorely difficult. . . .

And it was the same as it always was, as he lay curled up happily in his snug wrappings, promising himself that he would stay awake, until, until. . . Until he woke, in the dim morning room with a glimmer of light creeping round the dark square of the curtained window, and saw and heard nothing for an enchanted expectant space. . . And it was Christmas Day. 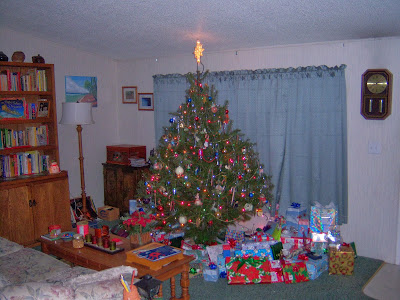 I believe the church did well, so long ago, when it set this great festival of Christ's birth at this most significant time of year, when the time of darkness has at last ceased lengthening and begun shortening again with each passing day, and the light has begun to grow.  For He is the light of the world, and the light shines in the darkness, and the darkness can never overcome it.

Whether you celebrate Christmas or not-- happy holy days!  I'll be back for the New Year.

Email ThisBlogThis!Share to TwitterShare to FacebookShare to Pinterest
Labels: Christmas, my life